HOW I MADE THE PECULIAR POSTCARD

I made a peculiar postcard shown in the previous blogpost and promised to tell you how I made it.

I started by collecting a set of prompts, scouring magazines, the Internet and my own brain.  Printed them out, cut and folded them into one strip per prompt. 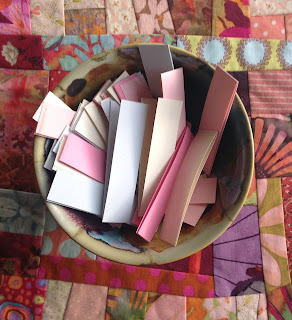 Here are examples of the prompts.

The idea was to take out a prompt one at a time and act on it before going on to the next one.

I started in a conventional way by putting inks and paints on to glass and putting the postcard size papers on top. 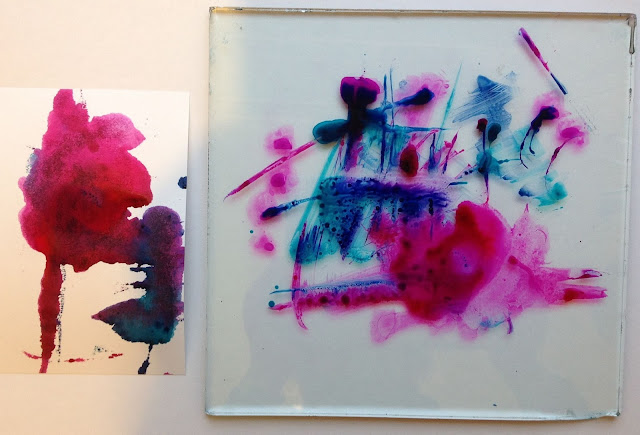 I made three and chose the middle.  I had no idea it was going to be a rhino at this stage although it is actually pretty obvious that it is.  Wasn't that clever of the paints and the glass. 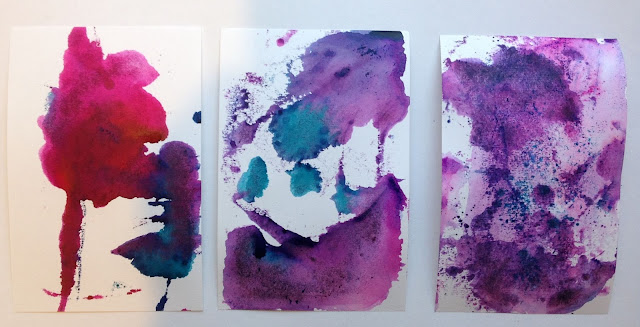 The first prompt I got was
"OUTLINE A SHAPE AND FILL IT WITH WRITING"
and the second was
"DRAW A GRID". 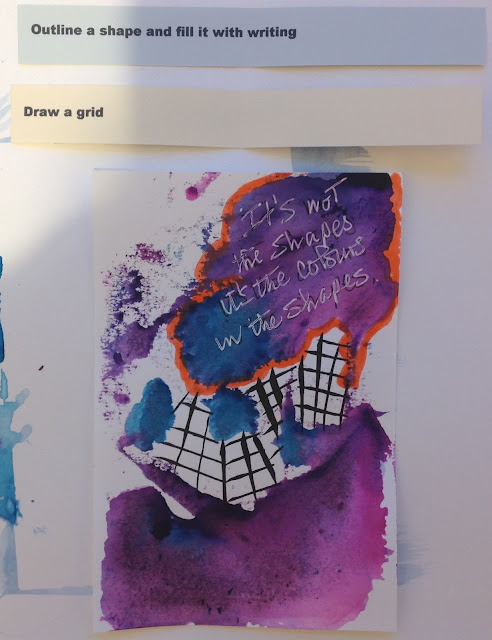 Next prompt was "ADD A FLOWER".  I cut out a flower from one of my wrapping paper designs. 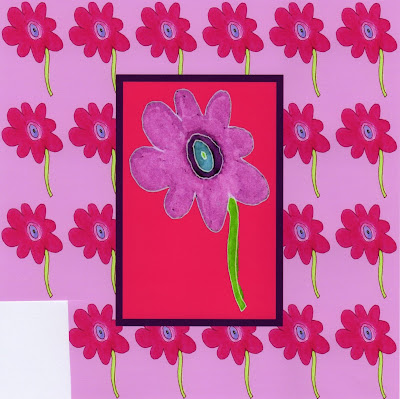 The last was
"ADD A BORDER AROUND SOMETHING ALREADY THERE"
- top and left and the two blue blobs.

And that's how this peculiar postcard came about. 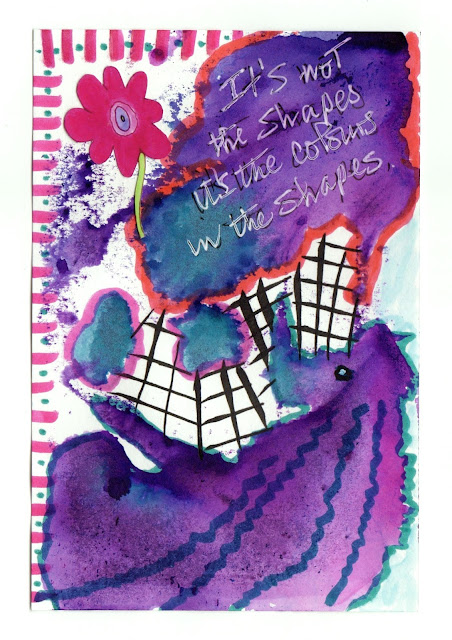 Rike at Art Journal Journey has chosen the theme "Animals from A to Z" and I made a postcard using the same method.

This time, before consulting the prompts, I painted the postcard pink.

The first prompt out of the bowl was
"ADD LITTLE SQUARES OF COLOUR".
I painted some little squares and kept them for a minute to see what happened next.

"PAINT A PIECE OF PAPER, CUT OUT MATISSE STYLE, GLUE ON". 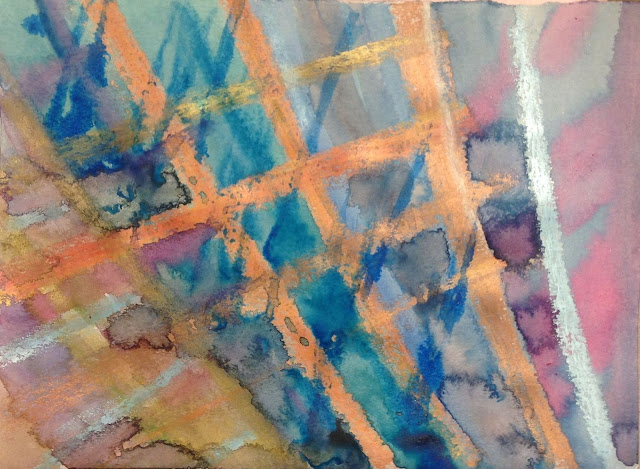 The cut-out shape, squiggle drawn first and cut completely at random on the back of the painted paper 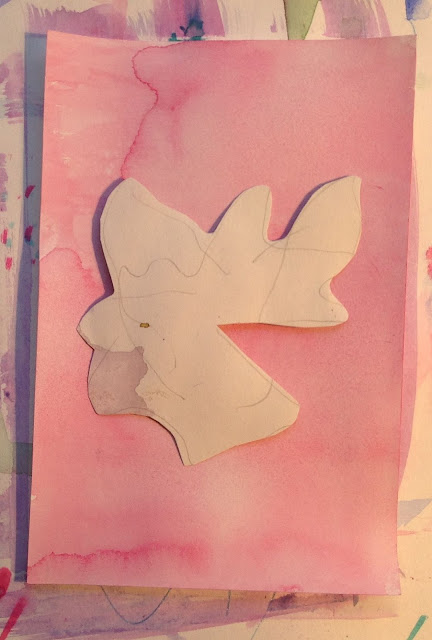 and turned round, with an added eye, it made a sort-of squirrel, yes? 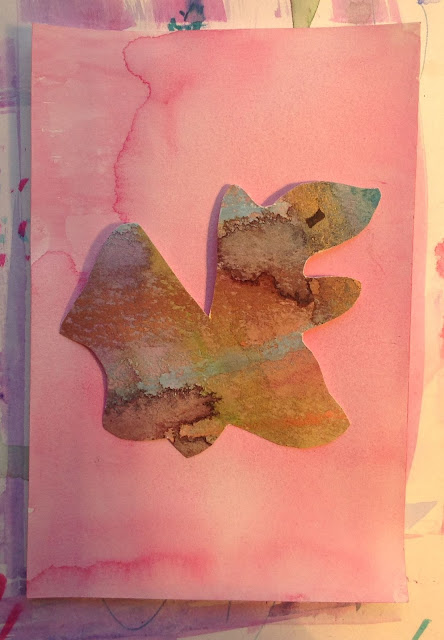 The third prompt said
"USE A HEADING FROM A MAGAZINE".

This took longer than anything else.  I had to search four magazines before finding anything vaguely appropriate.
Also some of the magazine articles were fascinating.

I'm sorry there are no more process photos as I got completely carried away with gluing, stamping and painting.


So, Rike, Susi, and Elizabeth , that's how I made "S is for Squirrel" for your challenge. 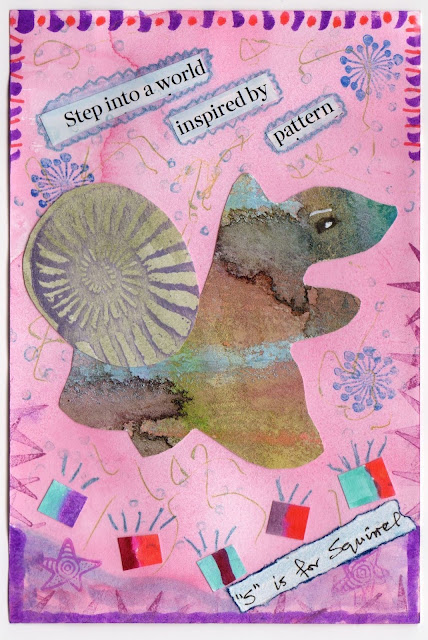 Just to remind you - here were the three prompts -
"ADD LITTLE SQUARES OF COLOUR",
"PAINT A PIECE OF PAPER, CUT OUT MATISSE STYLE, GLUE ON" and
"USE A HEADING FROM A MAGAZINE".
Posted by sheila 77 at 19:42

I think your prompts idea is great. It would be good for the days when Mr Mojo has gone for an outing and I can see that it would be easy to follow the instructions and have some fun.
The pages you made look fantastic Sheila, the squirrel looks so cute.
Have a good weekend.
Yvonne xx

Ahh, finally the mystery is revealed and it looks like you have had so much fun with your prompts 😁. I loved seeing how you applied the inks to the background and the colours are so rich - beautiful! I really like the cheerful character curled up at the bottom of the postcard too ...lol
😉. The patterned paper squirrel is such fun too, especially the fossilised tail - perfect! Hope you have had a lovely week and wishing you a wonderful weekend! J 😊

That sounds like a fun way to go about art. I could see doing it with friends. It might make art feel easy for people that don't usually do art.

Your pieces are fun and playful.

This sounds like the perfect way to make art. It sounds like it warms you up when your art has gotten stale, too. I love the prompts and enjoyed seeing how you put them to great use, too. These beautiful pages are great and your squirrel is a wonderful example for Art Journal Journey. Thanks for sharing it with us there today.

That is a brilliant idea Sheila. I think I need to do something like that. I had an English teacher decades ago who did that to get us to write stories, and I remember how fun it was. I bet it would fun creating art and push your mind a little bit too. :) Love the squirrel piece a lot and thanks for the great challenge. :) Have a happy weekend. Hugs-Erika

Well how fun AND brave that technique is! I keep scrolling up and down and checking every step and looking at the final outcomes. That is quite the self challenge. Or at least it would be for me. I’d have to have someone else force some prompts on me. I would write very simple ones...NOT cut out Matisse style. That is a new style for me. You always teach me something. I spun my screen to what else I might find. I found maybe a dog (a really cute one) and then a couple of heads only. I’m sure they were of one of your great imaginary creatures that live in your wonderful forests. I’ve heard of following a single prompt, but this is the first time I see 3 prompts. Both rhino and squirrel cards are terrific!

This is the coolest prompt idea I've heard of in a while. Love it and your piece. xoxo

What a cool idea! You made an Inspiration deck for yourself - other people order them online-lol.You are clever!
And wow - what amazing artwork accured!
I love your "S is for Squirrel " Sheila! Just stunning!
And thank you for explaining your progress of using your very own inspiration deck!

Thanks a lot for joining us with this wonderful post over at Art Journal Journey!
I wish you a happy weekend!
I get guests today for lunch and have to go straight away into my kitchen now.
oxo Susi

sorry tipped accured instead of occured!

This prompts me to say what a magnificent idea ! Love the squirrel, but its not just the clever shapes, its also your choice of colour blending which comes across. Inventive, clever, love it, Awesome !!

There never could be a better and fascinating process painting a squirrel as you did!! I adore your master piece!
First the clever idea to make yourself such prompts, then work out prompt after prompt - a real fun!
I had to smile about your wrapping paper design without the one cutted out flower you show us exactly!
I had to laugh about your searching the right heading from a magazin, which took longer than anything else ... we are artists no searchers, aren't we?
I have to try your working with prompts - it's such a funny and successful way to do art!
Love your rhino too - I scrolled up and down and again - reading your post is so joyful!
Thank you for sharing this absolutely amazing squirrel with us at Art Journal Journey, dear Sheila!
love
Rike

What a great way to get creative! I love the idea of prompts Sheila. Your squirrel is so cute. Lovely :D)

This is such a fun technique! Thanks for sharing the process. Love the final pieces. I've got some ideas swirling in my head now that take off on your idea. Hmmm. . .

ah ha so thats how you did it - thanks Shelia - what a great fun idea and especially for days when the (my) mind goes blank.
I have to say, I really loved the abstract design on the glass before you had got started, and would have been happy to have that up on my wall as it was :)
It was fascinating seeing how your adorable squirrel piece came about - the squirrel made me think of the one in the animated film 'Ice Age'.
Hope you're having a lovely weekend and not too cold up there - looking like a wintery week with very cold nights.
Gill xx

I'm a little late, but I've been looking at your post and I'm thrilled by this creative method! A really great, inspiring idea, dear Sheila! You can't help it... you just have to be creative! I have to try that out, it's very attractive!
... especially great is the cock of the squirrel
Ulrike

What a great technique! I love all the art you created Sheila, so inspiring! Off to dig out my inks!

both your rhino and your squirrel are fascinating. thanks for sharing the thoughts of the creative process! it is an overboarding Fantasy you have:) i´m not sure i would have found the squirrel in that:)
have a great week! johanna

Sheila, what a fantastic idea..a prompt bowl!! I vaguely remember doing something similar years ago, and it was soooo much fun. It takes that "now what do I do?" away, and makes it more fun to create because there's less pressure. No more getting stuck if you have a prompt bowl lying around the house. haha Great stuff!! Thanks for sharing it with us. :)

I have used prompts before but never 3 on the same piece of work. Very clever and great results. The squirrel is very cute

I continue to be amazed at your unique creativity. I love the use of inks and think the finished outcome of your journey is amazing

I just love your ‘S is for Squirrel’ and the different way of creating it with the three prompts! That lovely whorl behind his (or is it her?) tail makes me think of a fossilised amonite, that must have been fun to create! That also explains how the rhino 🦏 came to emerge. Lovely! Hugs for a new week!

Love the paints on glass..that would be wonderful hung as is... and then all these fun pieces done in this process... I love them all!! This is a very inspiring way to create and pump up the creative juices when they're faltering!! Or if there is a lull!! I am always inspired by pattern!! I read this post and must have been pulled away before I commented!! Love all these new directions!! Good job Sheila..you are so multi talented...garden lady!! Must Douglas is whispering in your ear like the sweet muse he is!!

You are just so artistic! I love seeing how your pieces evolve, with such wonderful results. Jx

You have been experimenting lots and it looks like loads of fun!

sheila 77
Welcome to Orange Esmeralda. I hope you enjoy your visit. I love colour in everything from paints to fabrics, love to make patterns and designs and try to make happy art. I also enjoy art challenges whose themes inspire me to make art I would never otherwise have thought about. Unless otherwise stated my artwork is original so please do not use it without my permission.