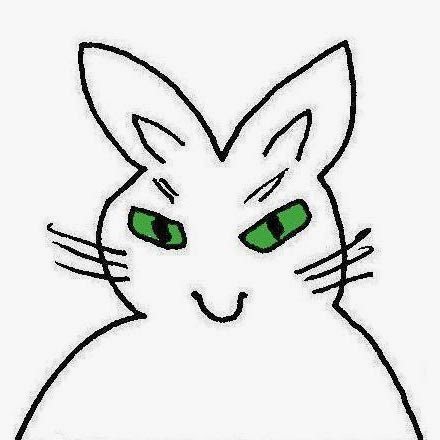 The challenge theme at "Soartful" for the month of August is "Eyeglasses/Spectacles".
I'm also linking to "Paint Party Friday".

My second thought on the theme (after the first one which was "?????") was that a short-sighted cat might need spectacles.

Have you any idea how sinister a cat looks with spectacles?

I drew endless cats with spectacles.
These are the one that are safer for you to see.

Who said you had to be able to draw to be an art blogger?

I quite like the third one but I think he's a rabbit pretending to be a cat, I might use him later.


Here's the first Pink Cat who came along. 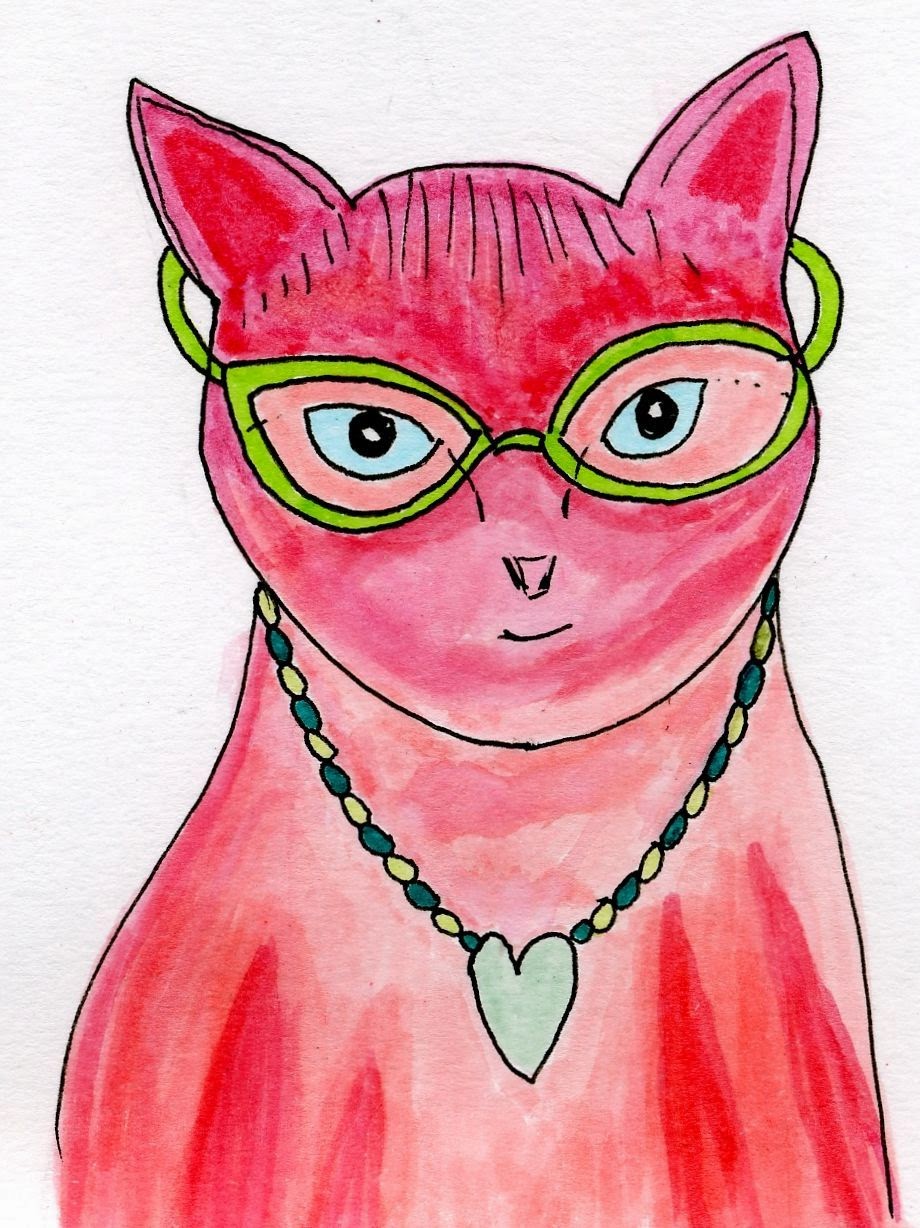 You may have noticed that Pink Cat does not have any whiskers - yet - a slight oversight, which luckily I noticed at the last minute.


Whose picture is she keeping in her locket?


And who doesn't qualify for spectacles? - SCOWL! 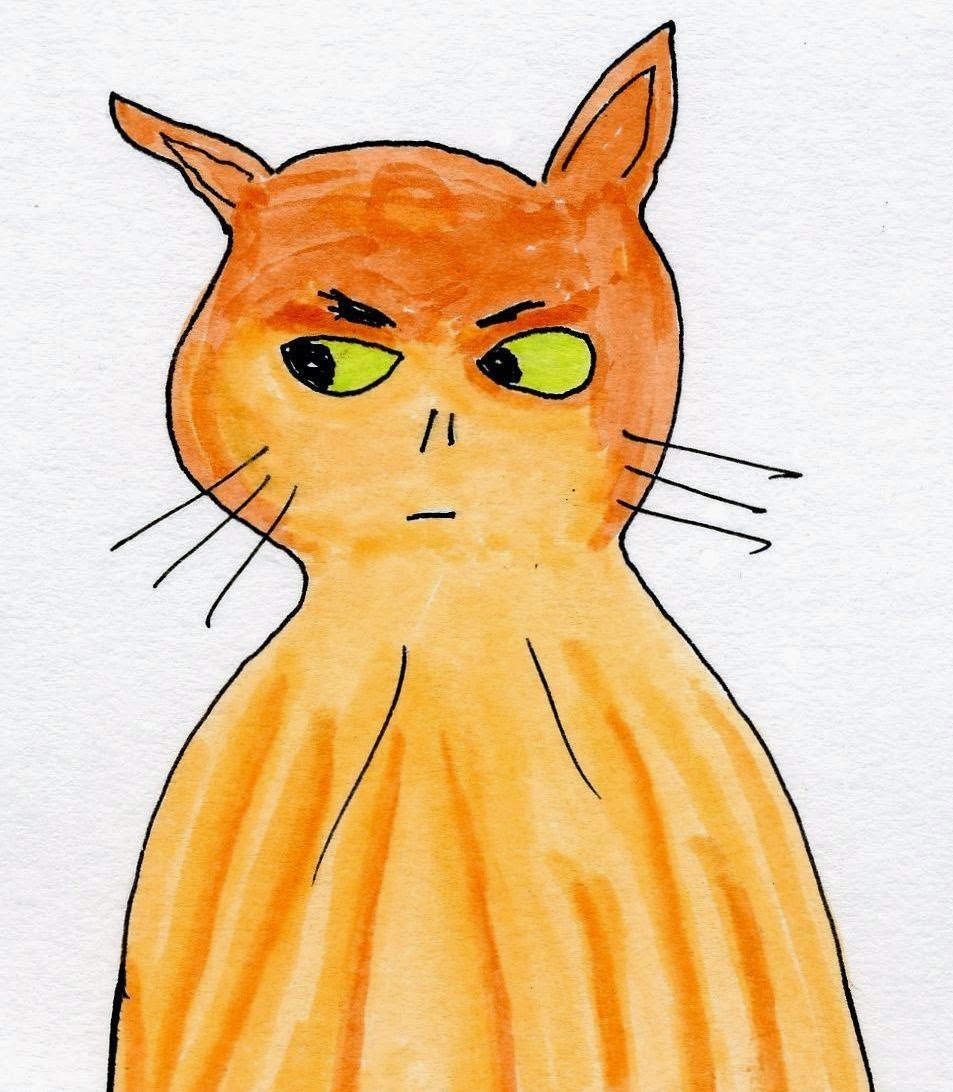 I made a half arch 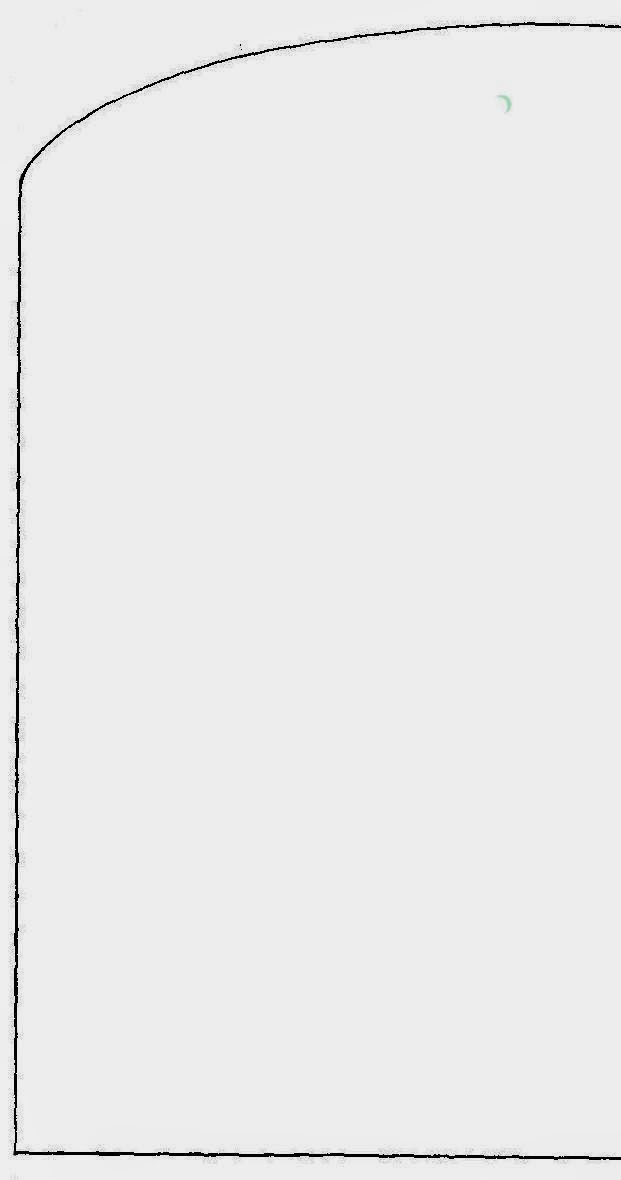 and some straight lines, which you will be able to imagine,

then put everything (including Pink Cat's whiskers) together in Photoshop.

The curly font is "Pea Sheila". 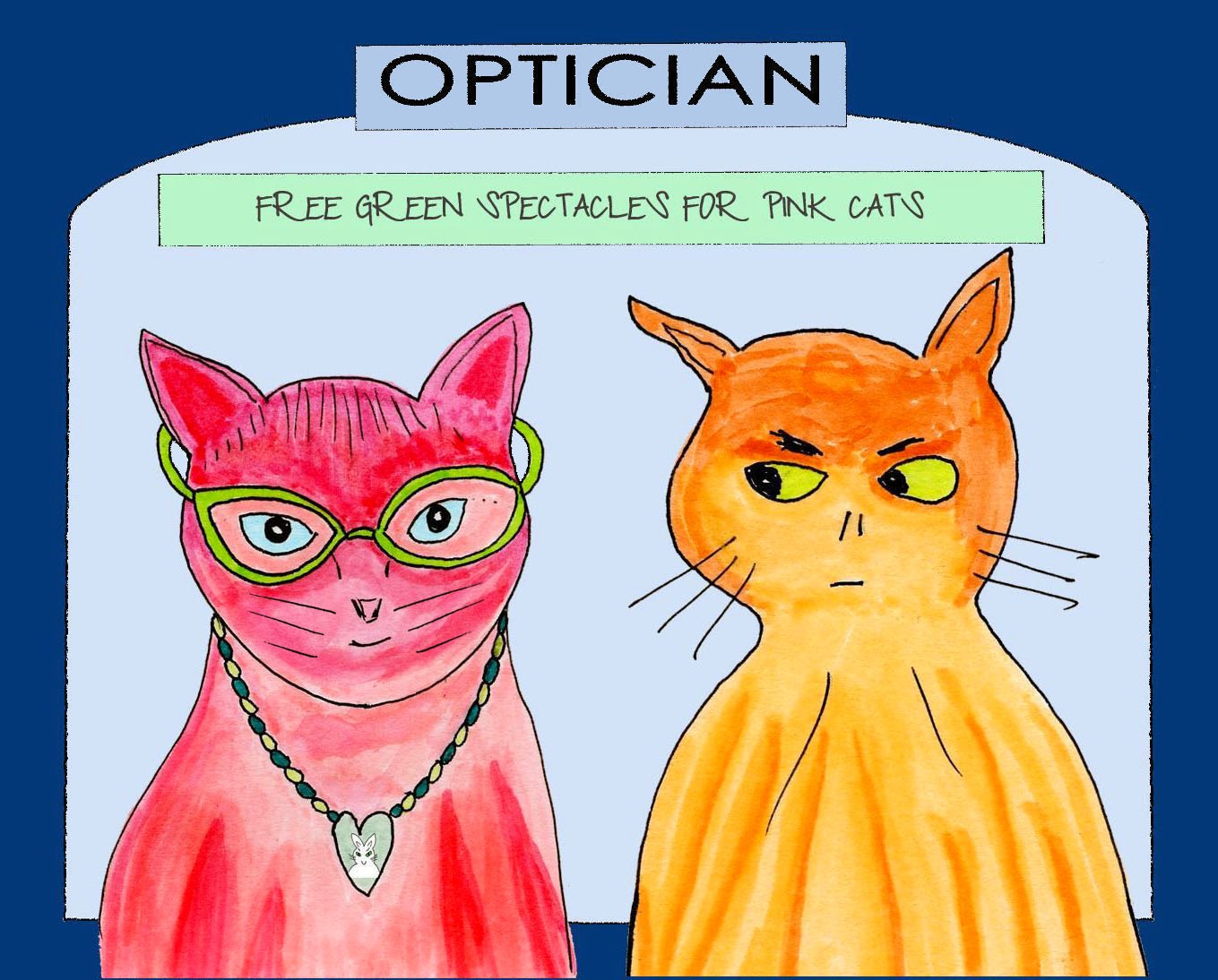 Bring along your pink cat!

What astonishing cats, the pink one is a real beauty. Glad you had fun playing! Valerie

What a wonderful idea, Sheila!! When I saw the first picture in my blog I thought: Oh, what a wonderful rabbit... and I hopped over to your blog and saw it should be a cat... But because you yourself said, some of your cats look like a rabbit think I may tell that...
Your pink cat looks so intelligent with her green glasses and she seems to be proud of them (and she doesn't look at all like a rabbit)
And I love the mimik of the yellow cat who seems to be a tom cat (for me) and I would like to give him something very nice because he seems to be so sad without any glasses...
Is there anything I could do for him? :)
Ciao Beate

This is fabulous, Sheila! Your imagination and talent have no bounds. Both of your cats are wonderful, even though one is a little "green" with envy.

The Tom is either jealous or eyeing up the cute chic. All the drawings are marvelous, you could create a super cattery. As always, your use of multi-media is outstanding and very inventive. Love it, Awesome !!

I'm out scouting about for a pink cat to take advantage of this awesome offer! LoL. Love your pink and yellow/orange cats! Fabulously fun take on the challenge theme.

Your cats are so adorable,Sheila! Beautiful the pink cat ... so lovely face and the cute necklace with the white rabbit-cat! Also I love the expression on the yellow cat´s face!
Absolutely wonderful post ... made me smile again and again!
Love, LOnettA

haha, this looks great, love your
creativity! Have a nice summer!
Groetjes Karin

I really enjoyed your whiskerless cat....seems she went in for some whisker inserts!! Great fun this week!! Love your humour!

That pink one is perfect... made me giggle to see them... and they are evil with glasses.... almost as evil as chickens in glasses... i saw some on google images and freaked myself out... great colour...xx

Haha, love seeing them together! The pink one looks very satisfied, and the yellow one is desperately jealous, not only of the spectacles I presume, but also of the necklace. Or maybe jealous of who is in the locket ...? Love it when pictures tell stories like that :-)

LOL Their expressions are priceless! There's a touch of the Dame Ednas about the bespectacled cat. You should really be going into the greetings card business, Sheila.

I love it! Your whimsical little creaters with glasses are spectacular. Blessings!

I loved the cats separately, but together with the arch this is such an adorable painting. Love it.

That is the loveliest pink cat I have ever seen. And her spectacles are so classy. One can just see the personality of each animal and they are all adorable. You are so clever, as always.

love your sketches!! i ALWAYS love cat paintings though...

I love all your cats, wonderful work. They are darling. Love the idea of them with glasses too.:)

I am inspired--I am going to have to experiment with cats and spectacles--the idea a cat looks sinister wearing a pair of glasses, makes me laugh. :o}

This post is so funny, I love the pink cat especially the spectacles but the expression on the tom cat is priceless. Must be a local offer I looked to take my 2 cats for some spectacles and they had to pay ! and then the shop did not stock pink specs!

These cats have such personality! You have such a way with your art and words Sheila that's fabulous! It's great to be back and visit you here again!

I love these cats!!! They have such a cute and humorous character! And they look incredibly sweet with their glasses! This is such a funny idea! Great artwork!

I'm back for another peek (with less internet struggles). I totally expected to see the kitties in a psychedelic spin of pink and yellow at the end of the post. You will NOT be predictable will you...good! I will bet there are a lot of cats at the drug store buying pink fur dye. Pink kitty is smug and yellow kitty is jealous. Very expressive cats.

Ooh, classy touch, has the pink cat with her amazing spectacles, and the orange one it is sad to see him like that. Clever and funny drawings, as always.

they have wonderful character

Oh Sheila, I love the way you have brought the demure Pink Cat and scowley Ginger Tom together under the arch! Pink Cat is so pleased with her free spectacles, and Ginger Tom so envious! Your tribe of cats are amazing.

So fun to see the progression of your work - just like a little peak into the artist's brain! Love Pink Kitty's little locket - wonderful detail! Happy PPF!

Oh Sheila, your cats are so funny, I love them!

oh, the yellow cat is green with envy... no wonder, the pink one is proud of her glasses like a queen!
love your humorous cats, sheila!

What an amazing post. You should write children's books Sheila and embellish them with your whimsical pieces of magic!!

WONDERFUL!! I love your various cats, what a lot of unique creations, so funny and crazy.
You discovered my cats I saw, that is a gang, they look so innocent but they have a trunkful of tricks *gg*
Big hugs Anja

Hahaa!
Such fun and your pink cat is so stylish with her cat's eyes style glasses ... thought she might be a trend setter of the no whiskers look LOL!
and WHAT is the yellow cat thinking...does he 'know' who's in the heart locket...
oxo

Hello Sheila, thanks to the nice comment you let on my blog i could discover your art work. Love how you experiment with colors and photo editing!! Thanks for sharing, all my best.

Haha Sheila, I am rolling over floor laughing and can´t stop :D I mean look at that expression in yellow cats face, how she wish she would be pink to, to get one of that stylish glasses too, hihi, I bet pink cat boasts with her new treasure alot :) What a cool theme and I try to find an optician here around who get me some free spectacles too ;) I am looking out for the ones big white bunny is wearing, hehe
♥ Conny
Piaroms Art Journaling

This has become incredibly great and very amusing !! Ideally, these facial expressions in the cat faces. The pink cat has a great green glasses and a very beautiful necklace. No wonder the yellow cat looks so envious. Feel sorry for her. Maybe you give her a fancy hat?
love, Gerda

Such an incredible fun here Sheila...
love all your amazing skeches and funny thoughts!

Sheila your cats are so adorable and what a fun idea, love the way the yellow cat looks at the pink cat with her fine spectacles.
Anni

Wonderful - it made me smile so much. Thank you!

sheila 77
Welcome to Orange Esmeralda. I hope you enjoy your visit. I love colour in everything from paints to fabrics, love to make patterns and designs and try to make happy art. I also enjoy art challenges whose themes inspire me to make art I would never otherwise have thought about. Unless otherwise stated my artwork is original so please do not use it without my permission.